FLARM is pretty popular in the sailplane crowd for collision avoidance. It's a nice system although pretty expensive. It communicates your current location and trajectory to other systems on the 915 MHz ISM band. I was installing a PowerFLARM core in a glider and unfortunately got pin 7 and 8 mixed up on the DB9 connector, applying 12v to the 5v output instead of the 12v input. Not the best design putting those two pins right next to each other... Took it apart to see if it could be easily repaired, it looked like a couple regulators had been taken out and no power was getting to the processor board. I didn't have the right regulators on hand and too many other projects at the time to go further, so I just sent it in for repair.

It ended up requiring both the boards to be replaced. My mistake, but I do think it's kind of unfortunate such an expensive device doesn't have better input protection. I was also disappointed to learn that the stock PowerFLARM does not receive 978 UAT ADSB - only 1090. The hardware is present but it costs another $200 to enable in software. 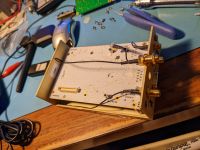 Opening the case. ADSB board on top has already been removed 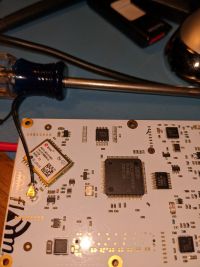 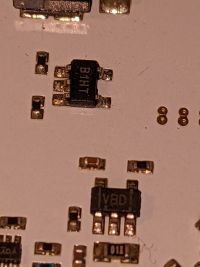